The organisation held its 16th annual meeting in the seaside resort of Lido de Jesolo, on 16th October by invitation of Club AMICI to coincide with their 20th Anniversary. Delegates from nine countries attended the meeting and they and their partners were each welcomed with a nice array of gifts awaiting them in their hotel rooms. This fantastic gesture from our Italian friends, the wonderful hotel with sea view rooms, coupled with good weather and trips to , set the scene for a successful meeting with full co-operation between delegates to achieve positive decisions. 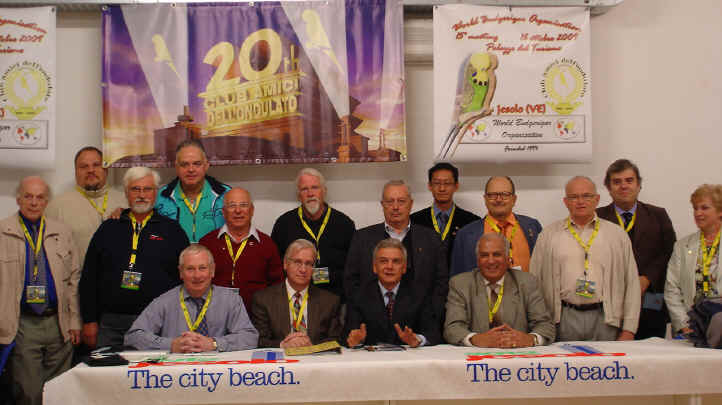 The WBO Chairman Gerd Bleicher thanked Club AMICI for their wonderful hospitality and welcomed especially Sig. Salvatore Cirmi, President of the Confederation Ornitholgique Mondiale (COM), to the meeting and said that the WBO has built up a good relationship with COM as many of our member countries are also members of COM.

Sig. Cirmi officially opened the meeting by welcoming all delegates and made special presentations to members of the WBO Executive Committee. He drew a parallel between the goals of the WBO and COM. This close cooperation between the two organisations resulted in both using the same ring colour sequence throughout the world and COM adopting the WBO Colour Standards and Pictorial Ideal for the budgerigar. This is indeed a huge positive step forward for the budgerigar fancy all over the world. May this friendship and cooperation continue and further strengthen the good working relationship.

The Secretary further informed the meeting of the result of the postal vote with regard to the proposed Rule Change re-disciplinary (Rule 3.vi) and the outcome was:

13 societies with 26 votes did not cast their vote

One important topic discussed at the meeting was the various Judging Methods that are used by different countries and whether they are judging by the comparison method or by the points system as adopted by COM. One of the topics for discussion at next year’s meeting will be on the qualifications required to become a judge in each country. A questionnaire is to be sent out to all member countries asking for information regarding methods of judging, age of birds and classification structure.

A proposition was put forward by two delegates requesting that a committee be set up to establish the criteria for a WBO Honorary Award to be known as the “Gould Award”. This was deferred to the Standards Committee to study the concept and come forward with suitable criteria.

The next WBO meeting will be held at 14.00 hrs on in in Póvoa de Varzim near . has an International airport and the society will be staging their International show during that period.

The current ring specification for the budgerigar and colour sequence as adopted by both the WBO and the World Organisation, the Confederation Ornithologique Mondiale (COM) is listed below:

The WBO currently enjoys membership from 34 affiliated societies that are spread over 6 continents in 25 countries. They are:

A list of current judges who are on the WBO International Judges Panel is on the website and full addresses of each judge may be obtained from the secretary. The conditions relating to admittance to the WBO Judges Panel are as follows:

b.         be a fully qualified judge for a minimum of 5-years in their own country or in the country/society in which they qualified.

c.         apply in writing to their National Society (or the society in which they qualified) to be placed on the list. The National Society will then be responsible for checking their qualifications and, if eligible, for passing names, addresses and telephone numbers to the WBO Secretary for inclusion on the list.

Each member country/society receives each year four WBO rosettes, as part of their affiliation, for Best Any Age, Best Any Age Opposite Sex, Best Young Bird & Best Young Bird Opposite Sex in Show to be awarded to four different birds at their national show. Names of winners and photos of the winning birds are then included on each year’s Rosette Winners file. Please visit the website for current & previous winners.

An Executive Committee was created in 2004 to run the affairs of the WBO between Council meetings. The E.C. for 2010 consists of Chairman Gerd Bleicher (), Secretary Ghalib Al-Nasser (), Vice-Chairman Carl Slavin () and Immediate Past Chairman Roger Carr (U.K.).