The organisation held its 17th Annual Meeting in the seaside resort of on 29th October by invitation from Club . Delegates from nine countries attended the meeting.

The WBO Chairman, Gerd Bleicher, thanked Club for the wonderful hospitty received and for the wonderful array of gifts that Club gave the delegates and their partners. This fantastic gesture from our Portuguese friends, the excellent hotel with sea view rooms, coupled with good weather and trips to Porto and Guimaraes, with visits to the Castle of the first King of Portugal (12th century) and the Bragança Dukes' Palace, which is a 15th century Palace, all set the scene for a another successful meeting with full cooperation between delegates to achieve positive decisions. The Chairman also welcomed the delegates from who were attending for the first time and the delegates from who were absent from meetings for many years.

The WBO Secretary, Ghb Al-Nasser, informed the meeting that three more new societies have affiliated to the WBO during the year, namely Federacion Ornitologica Argentina (FOA), Turkey Canary & Cage Birds Federation (TKKKF) and “Club De Canaticultores De Caracas” (). This brought our strength to 38 affiliated societies from 28 countries spread over the 6 continents. A warm welcome was extended to the members in , & .

The Secretary further informed the meeting of the result of the postal vote with regard to the proposed Rule Change re-Representation & Voting (Rules 4 & 5) and the outcome was:

8 societies with 16 votes did not cast their vote

The response from the questionnaire sent to member organisations asking about details of their Judges Training Scheme resulted in a response from 11 societies only.

The meeting approved the recommendation from the WBO Standards Committee who met in June to recognise the new variety, the Anthracite, and the written Colour Standard for that variety as well as minor changes to the wording in some varieties.

The WBO has created its own prestigious award called The Gould Award to commence from 2011 and to be awarded for Meritorious Services to the World of Budgerigars. The criteria for such an award to be as follows:

The next WBO meeting will be held at 14.00 hrs on in , the capital city of , to coincide with the Austran National hosted this year by the Budgerigar Society of New South Wales.

The current ring specification for the budgerigar and colour sequence as adopted by both the WBO and the World Organisation, the Confederation Ornithologique Mondiale (COM), is listed below:

The WBO currently is in a healthy position with (Magyarországi Diszmadárbarátok Pannónia Országos Szövetsčge) joining in early 2011 enjoying a membership from 39 affiliated societies that are spread over 6 continents in 29 countries. They are:

A list of current judges who are on the WBO International Judges Panel is on the website and full addresses of each judge may be obtained from the Secretary. The conditions relating to admittance to the WBO Judges Panel are as follows:

b.          be a fully qufied judge for a minimum of 5 years in their own country or in the country/society in which they qufied.

c.          apply in writing to their National Society (or the society in which they qufied) to be placed on the list. The National Society will then be responsible for checking their qufications and, if eligible, for passing names, addresses and telephone numbers to the WBO Secretary for inclusion on the list. 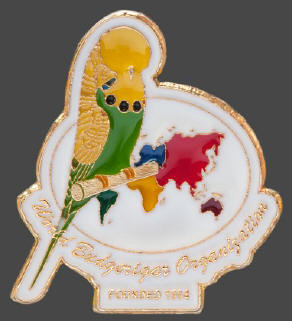 At the 2010 meeting the WBO approved its own designed badge depicting the WBO logo of the Ideal Budgerigar superimposed on the world map. The cost to purchase this badge, from the secretary, is 3.00 GB pounds each, plus postage.

Each member country/society receives four WBO rosettes each year, as part of their affiliation, for Best Any Age, Best Any Age Opposite Sex, Best Young Bird & Best Young Bird Opposite Sex in Show to be awarded to four different birds at their national show. Names of winners and photos of the winning birds are then included on each year’s Rosette Winners file. Please visit the website for current & previous winners.

The WBO is to investigate in depth the feasibility of staging its own World Show to coincide with one country’s national show.

An Executive Committee was created in 2004 to run the affairs of the WBO between Council meetings. The E.C. for 2011 consists of Chairman Gerd Bleicher (), Secretary Ghb Al-Nasser (), Vice-Chairman Carlos Ramôa () and Immediate Past Chairman Roger Carr (U.K.).